Home » We Watched Tucker Carlson’s Jan. 6 Documentary so You Don’t Have to

We Watched Tucker Carlson’s Jan. 6 Documentary so You Don’t Have to 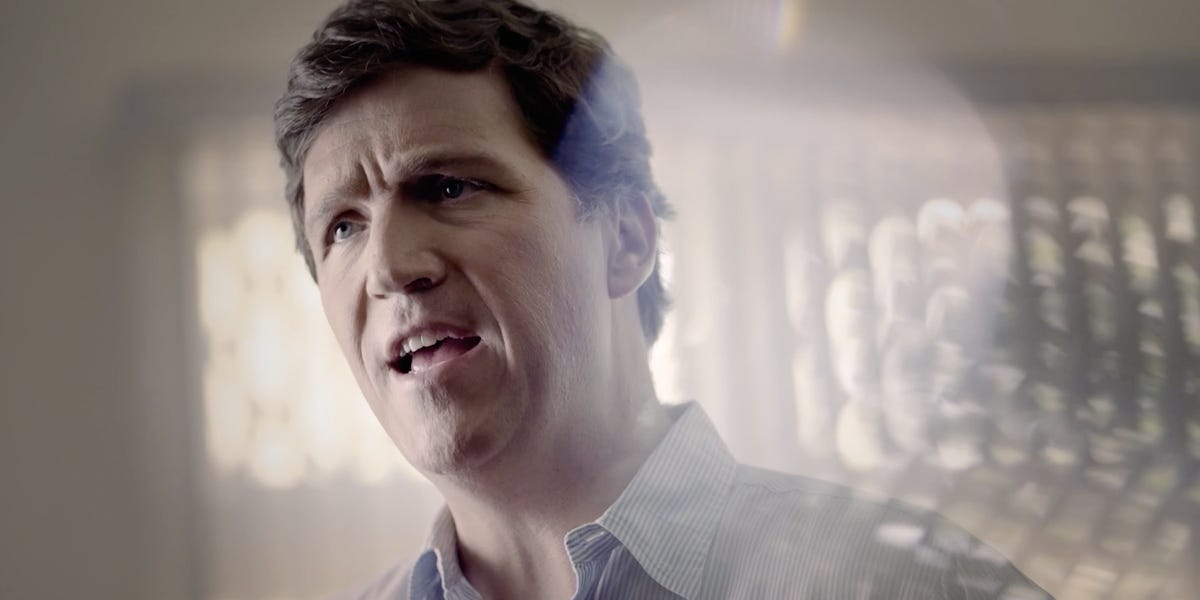 We are so sorry! We bumped into a system failure and couldn’t take your email this time.

Thank you for signing up!

In the telling of Tucker Carlson’s gloomy documentary, the Jan. 6 Capitol siege was inspired by Capitol Police and FBI informants, and now the US government is using it as a pretext for “hunting” all conservatives — false assertions that omit inconvenient but established facts like the violence committed by rioters and some of their affiliations with hate groups.

This erroneous and misleading alternate history has succeeded in stirring more concerns about the increasingly radioactive Fox opinion host, with two longtime network contributors recently resigning over it.

Carlson’s three-part “Patriot Purge” documentary — which debuted earlier this month on the FOX Nation streaming app — careens between the dreary backdrop of the US military response to Sept. 11, 2001, and the ongoing prosecutions against Americans accused of crimes involving the storming of the Capitol.

Also known as comparing apples to oranges, the false equivalence fallacy that plays out during the documentary proposes that if the US government did something to detainees during the War on Terror, then that is what they are either doing now or plan to do following the insurrection.

Rather than using evidence to spell out how the two are the same, Carlson just cuts to random examples from the Bush and Obama administrations’ use of controversial interrogation and intelligence techniques used against the likes of Al Qaeda and ISIS suspects without proving that the government is acting extrajudicially against its own citizens.

Over and over again, Carlson and his guests repeat that “50%” or “half the country” are being treated the same as Islamic terrorists from groups such as Al Qaeda or ISIS, at once attempting to absolve the insurrectionists and identify his audience with them.

“January 6th is being used as a pretext to strip millions of Americans — disfavored Americans — of their core constitutional rights, and to defame them as domestic terrorists,” Carlson says at the outset of the documentary.

The tone, tenor, and content of the documentary diverge significantly from how Fox News has covered the insurrection, which they most often refer to as the “Capitol riot.” Save for a few segments in its immediate aftermath, nobody else at Fox News has attempted to portray the attack on the US Capitol as a false flag operation or inside job in the way Carlson does in the documentary.

Carlson co-wrote the series with Scooter Downey, a promoter of the Pizzagate conspiracy theory and comic book artist whose hero’s outfit in “Rebel’s Run” closely resembles the Confederate flag.

We watched all three parts of the project, which clocks in at a little more than 90 minutes. These are the most forceful claims in it, many of which are either demonstrably false or impossible to disprove as pure speculation.

Fox News did not provide a statement in response to Insider’s request for comment on Carlson’s documentary and his guests.

One line from a guest in the documentary practically sums up its entire narrative structure.

“Interesting parallel, but it gets even better,” one of Carlson’s most relied upon interlocutors, Darren Beattie of the right-wing site Revolver.News, says toward the end of part one.

Beattie, a former Trump speechwriter who was fired from the White House amid media inquiries about his ties to white nationalists, has appeared on Carlson’s cable show several times before. He, along with several other right-wing media personalities, carry most of the explanatory load in the documentary.

Unlike in his reporting for Revolver, Beattie uses less couched language while speaking in the documentary. When casting doubt on one of the deceased Capitol Police officers, Beattie drops the “appears to” from his description of bear spray being doused on the late officer Brian Sicknick and implies the rioters didn’t attack him at all, omitting the fact that the officer was attacked with pepper spray instead (which he acknowledged in another story for Revolver).

Instead of offering that context and explaining how the evidence gathered from the day of the siege was added to over time, Carlson keeps flipping back and forth between B-roll footage from the War on Terror and sympathetic interviews with those involved in planning the “Stop the Steal” march on Jan. 6.

Portraying “Stop the Steal” planner Ali Alexander as an innocent bystander who has remained above legal scrutiny, Carlson omits that Alexander was subpoenaed by the House Jan. 6 committee in early October.

The documentary also features a claim by Blaze TV’s Elijah Schaffer that the scene outside the Capitol had been “de-escalated” before the breach despite the fact that the first set of barricades had already been taken by force, with “Stop the Steal” only having a permit to protest within a specific lot behind the building. On the scene that day, Schaffer argues that the Capitol Police were the ones who incited the riot by deploying tear gas on those who had already unlawfully breached the perimeter.

By setting aside these contextual facts and relying on Michael Waller — a security analyst who claims he “worked for years as a professional agitator” and was able to immediately identify “trained” false flag actors at the march preceding the storming of the Capitol — Carlson segues into ‘Part 2.’

The segment largely glosses over more reports and videos on how the rioters attacked police, including with stun-guns and a flag pole, and hurled racial slurs at a Black officer.

This is where Carlson fleshes out how any regular conservative can become persecuted by the federal government for having opinions on social media that the Biden administration “disagrees with.”

Maintaining the same gloomy soundtrack, darkened color palette and continuity editing that gives the impression of double vision, Carlson juxtaposes dramatic reenactments of FBI raids with sympathetic interviews of people ensnared in the federal investigation with warrants, including an Alaska couple who were mistakenly identified as breaking into House Speaker Nancy Pelosi’s office.

Notably, the bulk of Carlson’s argument that FBI agents incited the riot omits the names of white nationalist groups that informants infiltrated. The logo of the Three Percenters is shown briefly in part one, but mentions of that group or others such as the Proud Boys and Oath Keepers remain scant.

Carlson also compares the federal government’s response to the insurrection to how the US military toppled Saddam Hussein’s dictatorship in Iraq.

“In Iraq, during the first War on Terror, the US government tore down all vestiges of the previous regime, and then reordered the society from the top to the bottom,” Carlson says in part two. “First, our authorities targeted the people who had guns: law enforcement and the military.

“And then they turned their attention to the minds of the entire population,” he continues. “At the time, they called these ‘weapons of mass persuasion.’ Psychological warfare. It looks familiar now.”

Featuring a DEA agent who says he was working as an informant outside the Capitol on Jan. 6 and a former military officer who resigned from her post as the Army investigated her for leading a group of people from North Carolina to the “Stop the Steal” rally, Carlson uses the guests to do lots of telling but very little showing about how military psychological operations are the same thing that the FBI was deploying via its informants.

Most of the “false flag” theory is told through that officer, Emily Rainey, who attempts to apply her military experience to domestic law enforcement.

Conflating support for the GOP or former President Donald Trump with the federal government’s definition of extremism, a heavy soundtrack and recreated footage of soldiers taking bumper stickers off their cars ends up being the extent of evidence shown to make the “false flag” argument.

“The helicopters have left Afghanistan, and now they’ve landed here at home,” Carlson says at the close of part two. “They’ve begun to fight a new enemy in a new War on Terror … hunting down American citizens, purging them from society, throwing some of them into solitary confinement.”

‘Part 3’ warns of gulags and the left ‘hunting’ the right

The final third of the documentary turns up the temperature even more, lionizing the late Ashli Babbitt and doing the same rhetorical slight of hand with the Patriot Act as parts one and two did with the War on Terror.

Richard Barnett, the Capitol rioter who posed with his feet up on Pelosi’s desk, is presented by Carlson as a well meaning patriot in interviews with him and his attorney. Pelosi’s staff barricaded themselves into hiding and said they feared for their lives as the office was ransacked.

Barnett’s claims of torture inside a DC jail in the documentary are not corroborated beyond quotes from his lawyer and dramatic reenactments with actors. Instead of backing up these assertions, Carlson cuts back to CGI drone footage. In reality, about 40 defendants facing serious charges from the riot, such as assaulting a police officer, are being held in the Central Detention Facility in Washington, DC.

The rest of part three focuses on the Capitol Police shooting of Babbitt, featuring graphic footage of her death described as “the first confirmed kill” of Carlson’s “Second War on Terror” with only a brief acknowledgement that the officer who pulled the trigger was exonerated in an internal probe and is not facing any charges.

Still leaning on the same back and forth cuts to footage and anecdotes from the War on Terror, Carlson’s guests warn of “gulags” and Guantanamo Bay-style detention awaiting not just those involved in the insurrection, but any conservative who speaks their mind.

“They’re pushing you toward violence, and they’re doing it on purpose,” Carlson says. “But don’t fall for it.”