Back in late 2021, Intel and SK hynix completed the first stage of their long-awaited transfer of Intel’s NAND (and NAND-based SSD) business to SK hynix. That company, in turn, took Intel’s NAND SSD assets and put them under their own subsidiary, Solidigm, who took over sales of Intel’s existing SSD portfolio. Now, a few months later, Solidigm is gearing up to release its first post-Intel SSDs, the enterprise-focused D7-P5520 and D7-P5620.

Diving right into matters, Solidigm is essentially picking up right where Intel left off, both in regards to product design and product naming. Intel was already seeing solid market penetration with its D-series branding, so there’s little reason to give up a good thing for the new Solidigm. In any case, the new drives are designed and marketed to slot right in as the next-generation parts in the D7 lineup, which is Solidigm’s highest performance drives for the enterprise and server market.

From a pure specification standpoint, the big news with the latest generation of drives is that Solidigm has doubled their capacities. The D7-P5620 will be available in capacities from 1.6TB to 12.8TB, while the D7-P5520 will go up to 15.36TB for its larger form factor drives. At this point Solidigm has not announced what NAND they’re using, but as we haven’t heard anything about the company launching their 5th generation NAND to replace their current 144L TLC tech, presumably that’s what’s being used here – especially as Intel/Solidigm never released a 144L P5600 series drive.

As with earlier iterations of the D7 family, both drives are built from the same platform – meaning the same controller, NAND, and firmware. The only configuration difference between the drives is the amount of overprovisioning, with the P5600 drives using 20% overprovisioning to ensure faster performance, while the P5500 drives use just 4% overprovisioning to maximize capacity. Consequently, the P5620 is being pitched by the company as a mixed workload (mixed read/write) drive that can sustain up to 3 DWPD, while the P5520 is aimed at workloads with more reads than writes, with a 1 DWPD endurance.

Despite the difference in overprovisioning, both drives officially carry the same rated write performance: 4.2GB/second for large sequential writes, and random write IOPS of 220K. In the case of the P5620, this is actually a slight downgrade from the original P5600, though not entirely unexpected given the shift from 96L NAND to what’s presumably 144L NAND. Meanwhile read speeds are up slightly across the board, with both drives topping out at 1.1M read IOPS, or 7.1GB/second sequential.

We don’t have any additional information from the company on the controller used, however based on the specifications, at this juncture there’s nothing to indicate it’s significantly different from the existing Arbordale Plus controller. Though it sounds like Solidigm may be tweaking things in firmware slightly differently than Intel did, as Solidigm is focusing on read latency (especially reads under write pressure) more than Intel. In the case of the P5500 series, they’ve knocked 4K read latency down from 84μs to 75μs for the P5520; meanwhile write latency has seen a smaller drop, saving off 1μs to bring it down to 15μs. 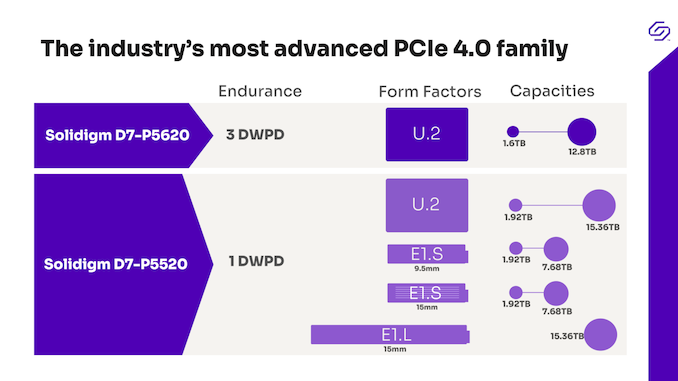 The launch of the P5520 also marks the significantly overdue introduction of EDSFF form factors for some of the D7 series drives. Along with the classic U.2 form factor that the drives have used for the last few generations, the P5520 will also be available in the E1.L and E1.S form factors. The latter is new territory for Solidigm, as even in the company’s lower-ender/higher-density D5 product lineup, they’ve only used E1.L previously. The P5520 E1.S drives, in turn, will actually come in two sizes: E1.S 9.5mm and E1.S 15mm. Both will offer the same reduced capacities – 7.68TB max versus double that for U2/E1.L – however the 15mm drive will use that space for a heatsink that the 9.5mm drive lacks the room to fit. Otherwise, the P5620 remains unchanged, and will only come in the U.2 form factor.

Wrapping things up, according to Solidigm the drives are already in mass production, and are even deployed with some OEMs and cloud providers.